History of Mercury Reports in Canada

In 1969 and 1970, it was discovered that various kinds of fish from many rivers and lakes in Ontario tested positive for unsafe levels of methylmercury. Levels in Clay Lake, Umfreville Lake, Lake St. Clair and Lake Erie were over what was considered safe, that is, above 5 parts per million (0.5ppm). In April 1971, the Ontario Minister of Lands and Forests declared that over 200 provincial lakes were being continuously tested. Similar monitoring was happening in Manitoba, Saskatchewan and Quebec.

Members of both governments, in Ontario and in Ottawa, debated this problem at length from 1970 to 1985.

These debates are contained in what is known as the Hansard Reports. There was a lot of disagreement amongst the various political parties at both levels. Overall, there was a debate on all the data related to the bodies of polluted water in Ontario, including the English-Wabigoon Rivers.

To complicate matters, there were other organizations, besides the two governments, and the two bands involved in this legal dispute, or litigation. Five different parties played a separate roles in resolving the matter of compensation caused by mercury poisoning.

The Cosway Report devotes many pages to the various steps involved in arriving at the final agreements in July 1986. This section in the Report, pages 33 to 56, makes interesting reading to those with a particular interest in our system of resolving complicated matters at the parliamentary level. For the needs of this booklet, a short summary is given.

The debate in the Ontario legislature was at times very lively. The same was true of Parliament in Ottawa. Many sides of the question of compensation to fishers and other people were debated at length. The first specific mention of mercury contamination of rivers in northwestern Ontario occurred on June 17th, 1970. It took over 16 years to reach an agreement among the five parties involved.

In November of 1973, the federal Member of Parliament for Kenora-Rainy River explained the socio-economic impact on the residents of the two First Nations involved. He appealed for a generous aid package to help the plaintiffs.

At various times, some members of parliament or other raised the issue of compensation; however, in June 1984 there was still no compensation.

The next year, The Royal Commission on the Northern Environment was established by the Ontario government. Its goal was to assess the effects major industries had on the northern environment and to make recommendations on alternative uses for resources in the north. It met with 14 communities, including Grassy Narrows First Nation and Wabaseemoong Independent Nations. Justice Hartt, the chairman, described their situation as intolerable and specifically named these two communities in one of the recommendations. It requested the appointment of a fact-finder to recommend appropriate methods to ensure the setting up of a solid economic base for both communities.

Because the regular political process was so slow, he said that a system of negotiation should be tried. In response to this recommendation, representatives of the Government of Canada, the Province of Ontario and the two communities signed a Memorandum of Understanding on Dec. 15, 1978. All parties agreed to appoint a mediator to resolve the issues in dispute. Eight more years went by before all parties concerned signed the final agreement.

The agreements were ratified, or approved, by a very large majority of the First Nations members over 18 years of age.

The 5 parties agreed to financial compensation to them in the following amounts:

The agreement outlined by the Memorandum of Understanding of 1985 set up the Mercury Disability Fund. Its purpose was to provide First Nations members with an avenue to apply for individual compensation should they have, or would develop in the future, symptoms or diseases consistent with mercury poisoning. The agreement specifically states that each of the First Nations was to receive $1,000,000 plus interest gained for purposes of compensation to those affected by mercury poisoning.

The Mercury Disability Board was set up to administer the Fund, including the final ruling on applications for compensation.

The board consists of one chairperson, one member from each of the two First Nations, two physicians and two other persons appointed by the Search Committee, a part of whose duty it is to select Board members.

An administrator was appointed by the Attorney General of Ontario and approved by the Mercury Disability Board to administer the funds as set out by law. The administrator is the Great-West Life Assurance Company of Winnipeg. Awards vary from $250.00 to $800.00 per month. The Board has the authority to make a recommendation regarding an application and to review the determination of the administrator. The ruling of the Board is final.

A brochure, with the title, ’Mercury Disability Claims: How the Process Works’, explains the application process in detail. Copies are available at the First Nations Council Offices, the Health Centers in both communities as well as from the Mercury Disability Board office in Kenora. 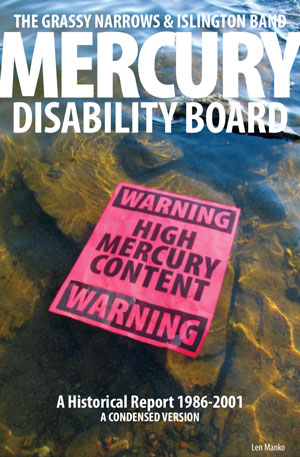 The full report (available here) consists of three volumes. It was written by a university student, Sylvia Cosway, who was working on her Ph.D. at the University of Manitoba. The entire study covers over 400 pages in a language more suited to readers with special training in medicine and chemistry. This booklet is written in a simpler style. It avoids many highly technical terms as well most of the details useful primarily to professionals.