In October 3, 1873, Chief Saskatcheway and 24 other chiefs signed the North West Angle Treaty with the federal government.

Nonetheless, in spite of these changes, the traditional lifestyle of hunting, fishing, trapping and gathering berries, rice and other foods continued as usual.

In the 1890s, a devastating disease struck this region. Members of the Grassy Narrows area relocated to Indian Lake. Life, however, continued as usual for the next half-century.

In 1963, the community of Grassy Narrows was officially relocated to its current location of Jones Road, about five miles from the original settlement. The federal policy required this move to enable residents to have access to improved roads, indoor plumbing, sewers, electricity and a new on-reserve school.

In spite of the supposed ‘advantages’ to the relocation, there were social upheavals. The activities of the traditional lifestyle were disrupted. The families could no longer travel as a cohesive family unit in pursuit of traditional livelihoods such as trapping, gathering, hunting, fishing, and harvesting. The values of independence and self-reliance were undermined. Respect for the land and nature was weakened. There was an increase in violence and alcohol abuse in both communities. Significant changes in the lives of residents of both First Nations occurred.

Other sources of jobs included the administration office, a daycare center, an education authority, a logging business, two stores, the district heating business, a family service organization, as well as a crisis center. The 3 largest employers employed 114 full-time and 89 part-time workers.

Other activities did not do very well. Commercial fishing, wild rice harvesting, and berry picking are examples that did not provide much employment.

In 2009, the Grassy Narrows First Nation had 1,378 registered members. In 1996 the census, or population count, shows that 46% had less than Gr.9, 32% with Gr.9-13. In short, First Nations members needed an opportunity to increase their level of education to make them more employable.

Of the 1,107 inhabitants registered in 2000, the same census shows 270 aboriginals over 15 years of age. Of that number, 185 people were included in the total aboriginal labour force. 105 were employed. Indian and Northern Affairs reveal an unemployment rate of 43%. This appears to be an improvement over the 1988 First Nations report showing 87% as unemployed. In short, employment opportunities were not abundant. 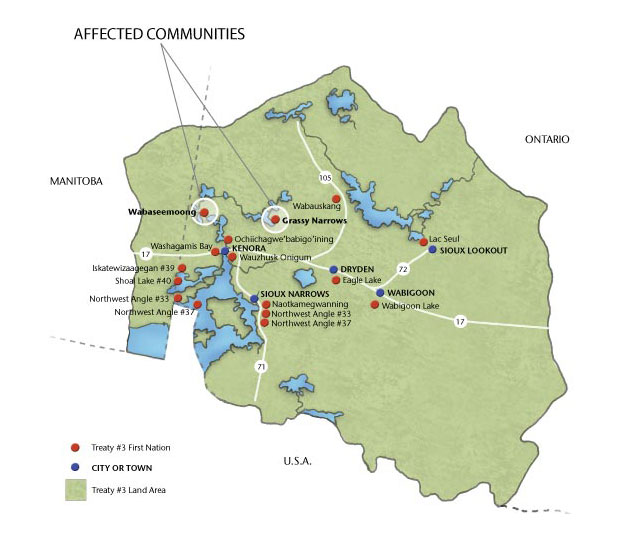 The Ojibwa ancestors of the current residents of Grassy Narrows First Nation and Wabaseemong Independent Nations lived in the area under study from time immemorial.